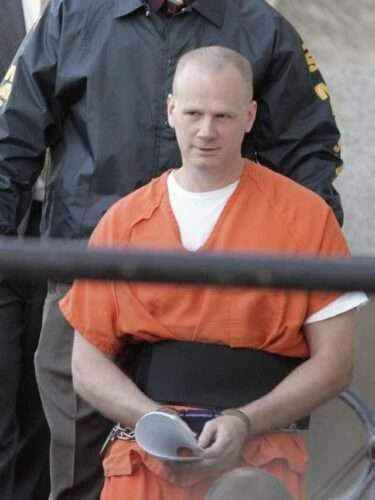 Dustin Honken was executed by the Federal Government for five murders related to a drug empire. According to court documents Dustin Honken was a meth kingpin in Iowa who was responsible for the murders of five people including two children and two informants. Authorities believe he was trying to avoid a drug investigation. Dustin Honken would be executed by lethal injection on July 17, 2020

Honken – a community college drop-out who created a meth empire in the early 1990s and murdered five people, including two government informants and two children, to stave off a federal drug investigation – was the third federal prisoner to be executed this week.

Daniel Lewis Lee, a white supremacist who killed a three-person family, including an 8-year-old girl, and Wesley Ira Purkey, who raped, murdered, dismembered and dumped the body of a 16-year-old girl in a septic pond, were put to death Tuesday and Thursday, respectively.

The executions were scheduled after the Department of Justice announced last year that it would begin to carry out capital punishments after a 17-year hiatus, saying “that defendants convicted of the most heinous crimes should be subject to a sentence of death.”

“We owe it to the victims of these horrific crimes, and to the families left behind, to carry forward the sentence imposed by our justice system,” Attorney General William P. Barr said in a statement.

While Honken’s execution is the last one in this weeklong spree, Keith Dwayne Nelson, who kidnapped and raped a 10-year-old girl, is scheduled to be executed Aug. 28.

When the time of death was announced, Honken, 52, became the first Iowan in more than 50 years to be put to death in an Iowa case. In 1963, Victor Feguer, who kidnapped and killed a Dubuque doctor, was executed by hanging at the Iowa State Penitentiary.

Iowa abolished the death penalty in 1965, but Honken was convicted in federal court due to the killing of government witnesses, which interfered with a federal case.

Like the other inmates put to death this week, Honken had appealed his sentence up until the last moments before his scheduled execution at 4 p.m. ET Friday.

But unlike the two executed earlier this week, Honken lacked headline-grabbing mitigating circumstances. In Lewis Lee’s case, his victims’ family had requested his sentenced be reduced to life in prison and in Purkey’s, his lawyers asserted that dementia and schizophrenia meant he was not competent to be executed.

The crime Honken was executed for started as a missing persons case tangentially connected to a federal drug trafficking charge. But nearly seven years after five people went missing, including witnesses scheduled to testify against Honken regarding his meth operation, a jailhouse informant would lead investigators to the victims’ bodies and a murder plot would unravel.

Honken was talented in math and science, but was an eloquent writer, too. He landed a scholarship to North Iowa Area Community College in the early 1990s.

Born into a life of uncertainty, Honken grew up in Britt, a small town in north central Iowa. His father, Jim, a drunken schemer, held powerful sway over his two sons, Jeff and Dustin, Honken’s sister, Angela Nelson, said during her brother’s murder trial.

After convincing Honken, then a recent high school graduate, to steal and copy the key to a local bank, his father robbed it. A second bank robbery would land him in prison, where he would regale his frequently visiting sons with tales of his criminal exploits.

Bumming around before starting at North Iowa, Honken fell into selling marijuana and cocaine, quickly building a list of customers who paid thousands for their fix.

Meth didn’t enter the picture until 1991, after he had completed a year of community college chemistry, earning an A- average.

Within a year, Honken and his childhood friend, Tim Cutkomp, had moved to Arizona, built a sophisticated methamphetamine cooking setup and all but perfected a recipe for pure meth, which they sold mainly through two dealers in northeast Iowa: Terry DeGeus, 32, and Greg Nicholson, 34.

By 1992, their multistate ring was netting hundreds of thousands of dollars.

But as Honken’s operation grew, so too did his dependence on meth and his singular focus on success – no matter the cost.

Soon, he would meet Angela Johnson, a woman who shared his ruthless worldview. Their attraction was mutual, and she would dump shortly dump her current boyfriend, Honken’s dealer, DeGeus, for the boss.

But what Honken didn’t know in early 1993 was that Nicholson had decided to cooperate with federal investigators, wearing a wire to a meet and recording Honken making a $3,000 deal for a future meth pickup. Honken and Cutkomp were promptly arrested on federal drug-trafficking charges.

After inadvertently learning that Nicholson had turned state’s witness, Honken and Johnson set out to find him and force him to recant his statements. They discovered him staying at the home of a friend, Lori Duncan, a single mother with two children, Amber, 6, and Kandi, 10.

Using a ruse to gain entry, Johnson and Honken did make a video of Nicholson denying his previous police statements, but then bound and gagged the adults, forced the children to pack bags and walked them at gunpoint to their car.

Johnson and Honken drove the four to a wooded area north of Mason City where Honken first took Duncan and Nicholson to an already dug grave and shot them execution-style. He then came back for the children and shot them, too.

Later, after learning DeGues also agreed to cooperate with authorities, Johnson tricked him into taking her to a vacant farm where Honken beat and killed him.

With no witnesses, the government dropped their drug case in 1995 and Honken went back to making meth. That stint was a short-lived, however, as he was picked up on new drug charges when his garage was raided in 1996.

This time, his co-conspirator, Cutkomp turned state’s witness, collecting Honken’s musings about destroying evidence, buying a gun and eliminating investigators and others who he thought would testify against him.

Investigators were sure Honken was involved with the earlier missing people; the coincidences were too great, but they were no closer to finding the bodies.

Acting on a tip that Johnson might be skipping town, authorities indicted her with aiding and abetting the murders of Nicholson, Duncan, Kandi, Amber and her ex-boyfriend DeGeus.

Law enforcement had enough evidence to believe Johnson had something to do with the murders, though Honken remained their suspected triggerman. But authorities needed five things before they could begin to prove their case: the bodies.

In jail, Johnson made friends with Robert “Bobby” Gene McNeese, a career criminal doing a life sentence who was a prolific snitch. Saying he knew a “lifer” who may take the rap for her and Honken, McNeese convinced her to tell him details about the crime only a participant would know and to draw him maps to the bodies.

Using this evidence, and testimony from a collection of prisoners Honken told in not-so-subtle terms that he killed a handful of people in 1993, prosecutors brought murder charges against the former underworld honcho.

After a two-month-long trial, the jury found him guilty on all 17 counts. They sentenced him to death specifically for the brutality and senselessness of the children’s killings.

At his sentencing in 2005, Honken recognized the victims’ families had suffered “a senseless destruction of human life” in losing their loved ones, but also declared that their “vengeance toward me is misguided.”

Honken has rarely spoken publicly since his sentencing, but maintains his innocence.

Johnson was originally sentenced to death for her part in the crime, had her sentence reduced to life in prison. She offered a measure of apology at her first sentencing in 2005, saying she wanted to tell law enforcement about the killings, but feared for her life.

“It sickens me to know what happened,” she said, “even more so not to tell anyone.”