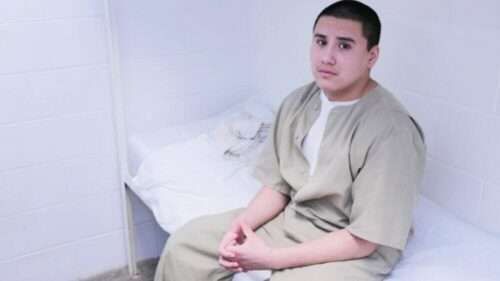 Kenneth Barhams wore his son’s student ID card from a cord around his neck Thursday morning. He talked about the son he will never see graduate.

“Braxton was my baby,” the elder Barhams said. “…You took him from me.”

In keeping with his plea deal, Macedo-Perez was sentenced Thursday to 65 years in the Department of Correction. Circuit Court Judge Terry Shewmaker gave Macedo-Perez credit for 172 days he’d been incarcerated.

Braxton Barhams, a Concord High School student, was slain in a June 22 drive-by shooting in the area of Benham and Garfield avenues in Elkhart. Macedo-Perez, 16 years old at the time of the murder, was later charged. In exchange for Macedo-Perez’s guilty plea, prosecutors agreed to not pursue a criminal gang sentence enhancement against the teen.

A probable cause affidavit unsealed Thursday yielded details about the slaying.

According to the court document, two juvenile witnesses interviewed by police said they were walking with Barhams at the time of the shooting. A gray Impala went past the group south on Benham, with Macedo-Perez — whom one of the witnesses described as a good friend — as a passenger.

A witness told police that Macedo-Perez flashed gang signs at Barhams, and Barhams did the same in response.

The affidavit reads that the witness “stated the driver of the Impala executed a U-turn at the intersection of West Garfield Avenue and Benham Avenue and proceeded north on Benham Avenue. (The witness) observed Jesus Macedo with a large gray gun in his hand, which Jesus Macedo fired the gun (four to five) times out of the Impala in the direction of both witnesses and Barhams.”

The Impala sped away. According to one witness, Barhams said, “I got shot, I got shot,” then fell to the ground.

Medics were called to the scene and transported Barhams to the hospital, where he was pronounced dead at 7:39 p.m. Macedo-Perez was arrested June 23 at his home.

On the witness stand Thursday, Kenneth Barhams said he never thought he’d bury his child. The slain youth’s mother, Jeanette Dancler, also talked about the impact of the murder.

“It’s broken my heart to the point where I didn’t want to live,” Dancler said. “…I never got to say goodbye to my son.”

Dancler said she doesn’t hate Macedo-Perez, adding, “I actually feel sorry for him.” She also voiced a question about her son’s murder.

“I would like to know why,” she said. “Why was he chosen to be killed?”

“We forgive you, because if we hold vengeance against you, that’s our soul,” she said. Someone called out “Amen!” from the audience section.

Given the opportunity to speak, Macedo-Perez apologized to Barhams’ family, and started to address his own.

“To my family, I’d like to say…” Macedo-Perez began before he broke down. His attorney, Kevin Milner, finished reading the teen’s prepared statement. In part, it was directed to his mother.

“I should have been a better son,” Milner read on his client’s behalf. “You didn’t fail me.”

Near the end of the sentencing, in response to a question from Judge Shewmaker, Jesus Macedo-Perez said he made a big mistake and he can’t take it back.

“Violence is not the answer, is it?,” Shewmaker asked.