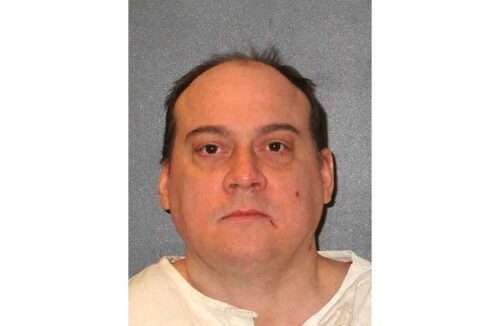 John Hummel was executed by the State of Texas for a quadruple murder. According to court documents John Hummel would murder his pregnant wife, daughter and father in law. John Hummel stabbed his wife, Joy Hummel, more than 30 times, then used a baseball bat to beat to death his daughter, Jodi Hummel, and his 57-year-old father-in-law, Clyde Bedford, who used a wheelchair. He then set their home on fire in Kennedale, a Fort Worth suburb. John Hummel would be executed by lethal injection on June 30 2021

A Texas inmate was executed Wednesday evening for an attack that killed his pregnant wife, 5-year-old daughter and father-in-law more than a decade ago.

John Hummel received a lethal injection at the state penitentiary in Huntsville for the December 2009 killings.

Authorities say Hummel stabbed his wife, Joy Hummel, more than 30 times, then used a baseball bat to beat to death his daughter, Jodi Hummel, and his 57-year-old father-in-law, Clyde Bedford, who used a wheelchair. He then set their home on fire in Kennedale, a Fort Worth suburb.

Hummel, strapped to the death chamber gurney, said a brief prayer that ended with him saying he would “be with Jesus when I wake.”

“I truly regret killing my family,” he said, then thanked friends for their prayers and support.

“I love each and every one of you,” he added.

As the lethal dose of the sedative pentobarbital began to take effect, he took a half-dozen breaths, then began snoring quietly. About a minute later, all movement stopped, although his eyes didn’t completely close. He was pronounced dead at 6:49 p.m. CDT, 13 minutes later.

“It was too easy,” Cecil Bedford, whose brother was among those killed, said after watching Hummel die. “It was like going to sleep.” He said a punishment more severe would be more appropriate. “A rope, a guillotine, a firing squad. There’s all kinds of good stuff to kill people. They should get what they deserve. An eye for an eye. I’m sorry. I’m old school.”

Prosecutors say he killed his family because he wanted to run off with a woman he met at a convenience store. After the fire, Hummel fled to Oceanside, California, near San Diego, but was later arrested. Investigators say he confessed to the killings.

Hummel, 45, who had worked as a hospital security guard, was convicted of capital murder for the deaths of his 34-year-old wife and father-in-law. He was not tried for his daughter’s death.

His attorney, Michael Mowla, did not file any last-minute appeals before his execution, saying all available legal avenues had been exhausted.

Appeals courts rejected Mowla’s attempts to stop his execution because Hummel had not been properly assessed on whether he would be a future danger — a question Texas juries must answer in death penalty cases. Mowla also unsuccessfully argued the appearance of impropriety as Hummel’s trial lawyer now works for the Tarrant County Criminal District Attorney’s Office, which convicted him.

Hummel had been scheduled to be executed on March 18, 2020, but it was postponed due to the coronavirus pandemic.

Bedford’s sister, Cylinda Bedford, said her family still doesn’t understand why Hummel killed his family. She described Joy Hummel, who worked as a massage therapist, as outgoing and bubbly. Jodi had been excited about starting school and Clyde Bedford, who was better known by his nickname Eddie, “loved that grand baby,” Cylinda Bedford said.

“Come on, your own baby. You gotta be some kind of monster,” Cylinda Bedford, 54, a retired body shop technician, said of Hummel. “I don’t have no closure. And him being put to death, is not going to be closure either because then we’ll never know why.”

Hummel’s attorney also argued that his client suffered from post-traumatic stress disorder and other issues related to his military service that caused him to “snap” one night.

But Miles Brissette, a prosecutor at Hummel’s trial, said authorities discovered Hummel had previously tried to kill his family by putting rat poison in a spaghetti dinner.

On the night of the killings, Hummel stood in his kitchen for 30 minutes so he could “psych himself up” for what he was about to do, and after killing his wife, he caught his breath before fatally beating the others, Brissette said.

“This guy senselessly took the life of a beautiful mother, a beautiful child and a grandfather that just did everything for them. For him to want to be single and just kill them this way is senseless,” said Brissette, who is now a defense attorney in Fort Worth.

Hummel was the second inmate executed this year in Texas and the fifth in the U.S. Last month, Texas resumed executions after nearly a year. But it didn’t go as planned: The execution was performed without media witnesses. An investigation blamed the mistake on several factors, including new personnel and procedures, along with insufficient oversight.

Media witnesses Wednesday evening were escorted to the death chamber without incident, although the punishment was delayed briefly as prison technicians had some difficulty inserting the needles into Hummel’s arms, agency spokesman Jeremy Desel said.

Cylinda Bedford said nothing will make up for the loss her family still feels at Christmas or on birthdays. And a piece of her history was lost when Hummel burned down the family home where her father was born and raised and where her parents raised their children. Her family sold the land where the home stood but nothing new has been built there.