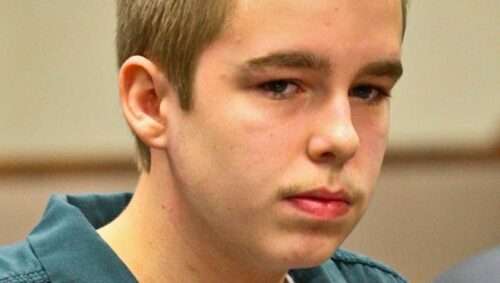 A father-and-son duo is tangled in a murder case that gripped Louisville and sparked national attention. One has confessed to the killing, and the other may have gotten away with it.

Josh Gouker was 31 years old with a lengthy criminal record when his stepson, 14-year-old Trey Zwicker, was found dead near a ditch behind Liberty High School in 2011. Gouker’s son from a previous relationship, Josh Young, was charged in connection with the murder.

But in a stunning admission during his sentencing, Gouker pleaded guilty to the crime. Young was acquitted, even though witnesses testified at his trial that he killed his stepbrother.

Now, for the first time, Young has said publicly that he beat Zwicker to death, confessing in a letter obtained by WDRB News and a series of phone calls from federal prison in Manchester, Ky., where he is serving a sentence for an unrelated gun charge.

Young, who was 15 when Zwicker was killed, has been in and out of jail or prison for assault, drug and gun crimes since then. He made the admission in a letter he wrote in 2018 as he waited to be sent to federal prison.

He wanted to “take my mask off,” he proclaimed in the letter, a copy of which the station received from a Gouker family friend.

Prison officials denied Young’s request for a sit-down interview. But in a series of phone calls in late 2018, he told WDRB News that he wrote the confession letter and detailed the events that led up to the murder.

“Yeah, I killed him,” Josh Young said. “But to keep it real, I don’t consider him my stepbrother. I mean, my dad was just having sex with his mom. But my dad was also having sex with a lot of women. But did I kill Trey Zwicker? Yeah.”

May 11, 2011. Young said he went to a cookout after school hosted by Zwicker’s mother. After it was over, Young said he headed to his cousin’s house, and Zwicker went home.

Later that night, Young said he met Zwicker behind Liberty to smoke marijuana.

“I had some weed,” he recalled. “And I took him out behind Liberty. And like, I didn’t really plan it. I can’t remember the exact words he said down there smokin’. But he got a little smart. And I was young. You know, my brain wasn’t fully developed, and my thought process was altered because of maybe a little weed.

“So I’m not in my right state of mind, and I just had enough of him saying little smart s***. Before I knew it, I done hit him with the baseball bat. And once I hit him, I just couldn’t stop hitting him. And that’s something that I haven’t publicly told anybody until now.

Young lost count of how many times he hit Zwicker with the bat. But he said the teen “started shaking and making all kinds of weird little noises,” so he kept hitting him to make the sounds stop.

“It was freaking me out! You know what I’m saying? So probably like 20 times. Overkill, for real. Way too many times,” Young said.

He said he took the baseball bat down to the ditch, because he and Zwicker would regularly vandalize cars and windows. But he said he never planned to kill Zwicker and didn’t have a clear explanation as to why he did it.

“For one, I just didn’t like him,” Young said. “He had a big mouth but no action to back it up. But for two, you know, he told on me one night when we got pulled over by the police coming home from a house party. And I had some weed on me. And he told on me about that, something pathetic.”

After he killed Zwicker, Young said he went to his cousin’s house with the bloody baseball bat and wearing bloody clothes. He said there was no water at his cousin’s house at the time, so he woke her up and told her to take him to dispose of the evidence. They went to an apartment complex near Old Shepherdsville Road, according to Young.

“It just so happened that the video camera pointing to that dumpster happened to be down for maintenance that week,” Young said. “So really, I just got lucky in so many ways.

After dumping the murder weapon, which was never found, Young said he aimlessly walked around the neighborhood for hours until it was time to get on the bus to go to school.

At Young’s trial, prosecutors suggested that it was possible Gouker encouraged or instructed him to kill Zwicker. Young denies that.

But Young’s confession raises new questions. Since he never testified in court and was acquitted, he can’t be charged or tried again in connection with Zwicker’s murder. Gouker pleaded guilty, against the advice of his attorneys. Now, he claims he is innocent and only pleaded guilty in order to save his son from a life in prison.

Soon after the murder, Gouker took Young with him to Tennessee and then Alabama, saying they were going on a vacation. In a prison interview with WDRB News, Gouker admitted he was trying to hide and protect his son.

While on the road, Gouker said Young told him that he killed Zwicker, but Gouker claimed he didn’t want to know any details in case he needed to pass a polygraph. When they were in Alabama, Gouker said he coached Young as to what to say in case police caught them.

“I told Josh, I said, ‘Listen, if they catch us, just start saying things like, ‘I deserve a mommy, too! Why can’t I have a mommy? Trey’s got a mommy and I don’t,’” Gouker recalled. “’Make it look like you just snapped.’”

Young’s biological mother died of an overdose when he was young.

Authorities eventually found Young and Gouker and extradited them back to Kentucky. Young was charged with murder as an adult, and Gouker was later charged as well.

But during Young’s police interview, he didn’t follow Gouker’s advice. Young refused to admit to anything to detectives. Gouker, however, told police that his son killed Zwicker with a baseball bat.

Gouker was sentenced to life in prison in 2013. He said Young wrote to him, telling him he was going to confess.

Gouker told WDRB News that while he did not commit the murder, he feels responsible for encouraging violence between the boys. He could tell that there was tension between the teenagers, so Gouker told them to “fight it out.” But he said he didn’t “think it would get that bad.”

Now serving a life sentence in prison, Gouker said he regrets the whole thing and that there was no reason for his stepson to have died.

Soon after Zwicker’s death, Young got a teardrop tattoo, which is typically associated with gang-related killings. Young admitted his tattoo was for Zwicker.

“Until now, we haven’t came out with the truth,” Young said. “I’m not here to make anybody believe me. I’m just here to tell the truth. I’m here to try to set the record straight for what I did and what my father didn’t do.”

While Young was killing Zwicker and even now thinking back on it, he said he has no remorse and has nothing to say to the Zwicker family.

“I may not have no remorse about the way that s*** happened, because I don’t,” Young said. “Like I don’t even like the dude, I don’t care. I mean, bad s*** happened to better people. You know what I’m saying?