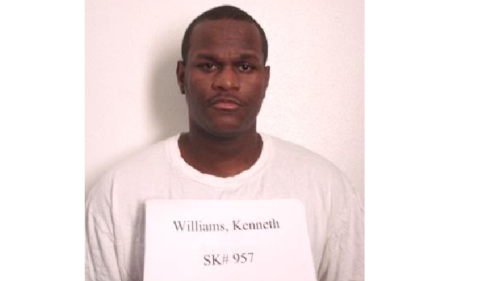 Arkansas has put to death its fourth inmate within a week after a dozen years without a single execution.

Kenneth Williams, 38, killed two people after escaping from a maximum-security prison where he was serving life for murdering a cheerleader.

His lawyers said he was intellectually disabled, but the US Supreme Court rejected his last appeal.

The four executions were carried out before the state’s supply of a drug used in lethal injections could expire.

Convicted murderer Ledell Lee was first to be put to death last Thursday.

The next two, Jack Jones and Marcel Williams, were executed on Monday.

State prosecutors have vowed to appeal and put them to death as well.

Williams was sentenced to life in prison for the 1998 murder of 19-year-old cheerleader Dominique Hurd. A jury had spared him the death penalty.

After a month in the penitentiary, he escaped on 3 October 1999 by hiding in a barrel used to carry kitchen refuse.

Not far from the prison, he encountered Cecil Boren, 57, on his farm.

He killed Mr Boren, shooting him multiple times, and stole his pick-up truck.

Williams drove north to Missouri, where he led police on a chase that caused the death of 24-year-old delivery driver Michael Greenwood.

Since being jailed, Williams has become an ordained Christian minister, and written his autobiography as well as a book warning against gang life.

“His execution will not bring my father back or return to us what has been taken, but it will cause additional suffering,” Kayla Greenwood wrote.

She said her family had bought plane tickets for Williams’ daughter and granddaughter to visit him one last time, even picking them up at the airport and driving them to the prison.

But the state’s Republican governor said the inmate did not deserve mercy.

Mr Boren’s widow, who was to watch the execution, said earlier she was looking forward to seeing justice served.

“People have to be punished for things they’ve done.”

The accelerated execution timetable was scheduled because the state’s stock of a sedative, midazolam, used in lethal injections is due to expire at the end of this month.