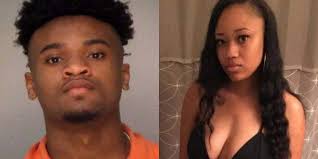 Kevon Watkins was sixteen years old when he murdered his sister. According to court documents Kevon Watkins would return to his Georgia home and change the WIFI password so he could have all of the stream to himself. When his sister started to argue with him, he would not share the password, the two ended in a physical fight and Kevon Watkins would strangle his sister to death. This teen killer would be convicted on all charges and be sentenced to life in prison

A Georgia teen who choked his sister to death last year during a fight over the family’s Wi-Fi password has been sentenced to life in prison.

In February 2018, Kevon Watkins, who was 16 years old at the time, came home from school and changed the password to his family’s Wi-Fi because the connection lagged on his Xbox when too many people were on the network, reported WSB-TV.

At one point, Kevon’s mother tried to take his Xbox from his room when his sister Alexus Watkins, 19, confronted him, according to testimony at the teen’s trial and 911 calls from the incident.

During the argument between Alexus and Kevon, the teen put his sister in a chokehold and didn’t release her until over 10 minutes later when police arrived, The Macon Telegraph reported.

Alexus was pronounced dead of asphyxiation early the next morning at a local hospital.

During the hearing, Bibb County Superior Court Judge Verda Colvin explained she found Kevon guilty of murder instead of voluntary manslaughter because his 13-year-old brother tried to get him to stop choking their sister.

“Even under the best estimation, by the time [a sheriff’s deputy] got there …. It had been at least 11 minutes that the defendant had to have been choking his sister,” Colvin said, according to the local paper. “In those 10 minutes, she had to have stopped moving. Perhaps that wasn’t noticed by the defendant because he was still angry.”

As he was sentenced, Kevon Watkins cried along with his family, who were sitting on courtroom benches.

Before leaving the courtroom, Kevon emotionally sobbed and struggled to mutter the words, “I’m sorry.”

“I think everyone understands,” Judge Colvin said. “Including this court.”

Kevon Watkins previously told an investigator he and his sister argued nearly every day. Before Colvin sentenced Kevon, she expressed sorrow the adults in Kevon’s life never disciplined him or gave him the resources to deal with his anger.

Colvin called her decision “the most difficult thing I’ve had to do since I took the bench in April of 2014.”

A Macon teenager was found guilty of felony murder and aggravated assault in the strangulation death of his sister during a family fight about Wi-Fi last February.

Family and friends of Kevon Lamar Watkins wept and wailed after Bibb Superior Court Judge Verda M. Colvin handed down a sentence of life in prison with a chance of parole for the slaying of 19-year-old Alexus Breanna Watkins.

Colvin said the decision after the bench trial was “the most difficult thing I’ve had to do since I took the bench in April of 2014.”

In explaining her decision, Colvin said she thought philosophically about the case as she reviewed her notes Thursday night.