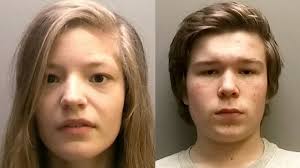 Lucas Markham and Kim Edwards were fifteen years old when they would murder Kims mother and her sister. According to court documents the two teen killers decided to murder Kim’s mom and sister because they thought the mother wanted to break up the pair. The thirteen year old sister was collateral damage. Lucas would stab the mother to death in her room before killing the thirteen year old girl. The two would have sex after the murders and watch the Twilight movies. Both would be sentenced to life in prison with no chance of parole for 17 years

One of the two so-called teen “Twilight” killers in the UK who murdered his girlfriend’s mother and sister recalled the brutal slayings in a documentary which aired Monday.

Lucas Markham and his girlfriend Kim Edwards, both 15, are each serving 20 years for last year’s murders of Elizabeth and Katie Edwards in the town of Spalding.

Judges in London recently allowed the identities of the two teen killers to be revealed. In the documentary that aired on Channel 5 in the UK, Markham recalled how he ended the two lives while his girlfriend looked on.

“I went into her mum’s room and stabbed her in the neck while she was asleep on her side and smothered her face with a pillow,” Markham told police of last year’s murders, according to the Sun.

The teen killers had sex, took a bath and watched all for of the “Twilight” flicks after the murders were committed in April of last year.

They committed the murders because they believed Elizabeth Edwards wanted to break them up, according to the Sun.

When Kim Edwards was asked about the murders, she told cops, “I was OK with it,” according to the Sun.

“My mum does not have to deal with me anymore being suicidal, and she does not have to wake up worrying every morning to see if I am still alive,” she said, according to the British newspaper. My sister does not have to go through all the heartbreak and like just all the emotions and stuff.”

Both teens were given 20-year sentences in November.

“The murders of Elizabeth and Katie Edwards were horrific and brutal and the whole country shared a sense of shock that two juveniles, who were only 14 years old at the time, could have carried out such a horrendous act,” Detective Superintendent Martin Holvey of the Lincolnshire Police Department said in a statement earlier this month.

“I’m sure that sense of disbelief and horror will be deepened now it is known that it was Elizabeth’s own daughter who was responsible for plotting with her boyfriend to carry out the murders.”