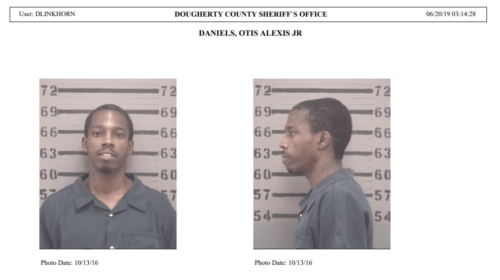 A second chance at freedom could come to an Albany man after spending more than 20 years in jail after his murder conviction in 1998.

Otis Daniels was 16 at the time and sentenced to life without parole.

A supreme court ruling finds sentencing a minor to life without the chance of parole is unconstitutional. They said that is what happened in Daniel’s case.

The A&E Network did a documentary on the story as part of its “Kids Behind Bars” series.

Now his re-sentencing could change his fate, but there are still other factors to be considered.

While in chains, words like possible or hope can mean the world for inmates. But at what cost?

“Every human being deserves to be forgiven and deserves a second chance,” said Phil Cannon, who was the defense attorney for the then 16-year-old Daniels.

Daniels was sentenced to life without parole on multiple charges.

Cannon said this was a death penalty case, that the state was pushing for.

“That was not about getting Otis out of it, that was about saving Otis’ life,” Cannon said.

When the US Supreme Court in 2012 ruled it unconstitutional to sentence minors to life without parole, Daniels’ chances at freedom grew.

Edwards said Daniels will get credit for the time he’s served.

“Forty-five years is what we are looking at in terms of his eligibility for three consecutive life sentences,” said Edwards.

The parole board will consider many factors in their evaluation.

“I was glad that people like Otis, in general, would at least have the opportunity to come back and ask,” said Cannon.

Cannon also said Daniels and others at least deserve that chance.

Edwards said just because there is a possibility of parole doesn’t mean he will be paroled.

The parole board will consider factors like an inmates behavior behind bars as well.

Pursuant to his guilty plea, Daniels admitted that he broke into the home where Valene McGourk lived with her daughter, Valerie.   Both women were home at the time, and Daniels demanded money from them, assaulted them, and when they did not comply with his demands, shot them both.   Valene McGourk died several weeks later as a result of Daniels’s attack.   Valerie McGourk suffered gunshot injuries to her face and neck, but survived.1  Otis Daniels was indicted on 22 criminal charges stemming from the attack, and he subsequently pled guilty to malice murder, kidnaping, armed robbery, aggravated battery, theft, and illegal firearm possession.   The trial court, noting that Otis Daniels had previously been adjudicated a felon on charges of armed robbery, sentenced him as a repeat offender to consecutive life sentences under the mandatory provisions of OCGA § 17-10-7(b)(2).

Otis Daniels claims that the trial court erred in sentencing him as a repeat offender, because his only prior felony conviction was entered on a guilty plea as a first offender, and had resulted in a probated sentence pursuant to OCGA § 42-8-60.   Because a first offender’s guilty plea does not constitute a “conviction” under the Criminal Code of Georgia,2 Daniels argues that at the time he pled guilty in this matter, he had no prior convictions, and should not have been sentenced as a repeat offender.

Otis Daniels’s appeal from his guilty pleas in this case is cognizable only to the extent that the issues raised can be resolved by facts appearing in the record.3  The record in this case plainly shows that Daniels’s argument is meritless.   It is true that in November 1995, Otis Daniels pled guilty to charges of armed robbery, was granted first offender treatment, and was given a probated sentence of 20 years.   However, roughly two months later, Otis Daniels violated the terms of his first offender probation by receiving a stolen automobile, attempting to elude police officers, and obstructing police officers in the performance of their duty.   Thereafter, in April 1996, Daniels’s first offender probationary status was revoked, he was adjudicated guilty on the armed robbery charge,4 and ordered to serve two of his twenty-year sentence for armed robbery, with the remainder of the sentence to be probated.

Thus, due to his earlier violation of the terms of his first offender probation, Otis Daniels was a convicted felon at the time he was sentenced by the trial court for his deadly attack on the McGourks, and the trial court did not err by treating him as a repeat offender and entering the maximum sentences available for the crimes to which he pled guilty.5

Valerie McGouirk could not have been a more devoted mum to her two girls, Felicia and Valene.

Her whole world revolved around her family and she did everything she could to surround her children and young grandchild with love.

Daughter Felicia said: “I was a young mom and my grandmother, Karen, and my mom, Valerie, they were just an amazing support system.

“My sister, who was a wonderful aunt to my daughter. And my mom was supermom.

“She helped me in every aspect. I stayed in school, I was working, I had my own little home.

Mobile home park over in Albany. We were in a good side of town. Everything seemed to be good in our lives.”

But on March 31, 1998, their whole world was blown apart when Otis Daniels Junior broke into their home in Albany, Georgia, America.

Then just 16, Otis as high on drugs when he tried to rob Valerie.

But when he met with resistance he opened fire – firing the fatal shots that would eventually lead to the 44-year-old’s death weeks later in hospital.

Realising her daughter, Valene had witnessed his brutal act he turned the gun on her, shooting her in the face.

Brave Valene managed to flee the family home and call for help but she had been left with devastating injuries.

Felicia, living with her husband and her young son, was given the chilling news that both her mother and her sister had been shot and were in the hospital.

At first, she refused to believe it, desperately praying it was a cruel April Fools’ prank.

But when she walked into her sister’s room, she realised to terrifying truth of what had happened at her former family home.

Felicia said: “We got to the hospital and I remember some doors opening and my grandmother walking out.

“She said ‘your sister’s been shot in the face’. So I go in there to see Valene and I see the worst, most horrible sight I’ve ever seen in my life.

“My baby sister was sitting on the end of a bed and when I got up to her, her face. There was just a hole.

“Her teeth and her tongue was hanging out the bottom of her throat. And I remember thinking oh my God. This isn’t real. This can’t be real.”

Detective Sean Daniel was one of the first police officers on the scene and what he saw has stayed with him in horrifying detail ever since.

“And the younger victims teeth were scattered about the floor where the bullet had ripped through her jaw. It was just a gruesome scene.

“To this day, and it was 20 years ago, I could still walk down that hallway and see that blood and see them teeth, and see her laying on the floor.”

But Otis was still at large and police had no clue who had carried out the violent robbery.

Courageous Valene, unable to talk because of her horrifying facial injuries, managed to write a note giving a description of the teen responsible and the next morning Otis’s name was first mentioned.

The 16-year-old was arrested and had confessed to the robbery and shootings before his mother had even reached the police station.

He claimed he had seen the mother and daughter in their trailer and thought he could rob them both with no resistance after he had been taking crack cocaine.

Chillingly, he admitted he was at school with Valene.

Otis had demanded money and when Valene onyl had a few dollars to give him he dragged her down the hall of the trailer as she screamed.

As soon as her mum screamed at him to let her daughter go, Otis show her  and then shot Valene in the face.

The original prosecutor, Kenneth Hodges, said: “He told the police voluntarily what he did and referring to the victims in very derogatory ways, saying ‘I shot the b****’.”

Valerie, meanwhile was in 16 hours of surgery, while doctors tried to piece Valene’s mouth back together.

Valene survived the gunshot wounds but has since had to have 32 reconstructive surgeries on her face.

Tragically, after five weeks on a ventilator, Valerie succumbed to her injuries.

Otis pleaded guilty to three serious charges and was jailed for three life sentences without the chance of parole at just 16.

Over the last 20 years in jail, the killer insists he is a changed man, something his mother, Shirley Bradford, also firmly believes

She said: “He did not mean to shoot anyone. He cried more than I. We both cried.

“I just felt like the system failed me, my family, as well as Valerie McGouirk family.”

He insists he has remained sober during his time behind bars and seems to have been a model prisoner.

And there is now hope that he could be released after America’s Supreme Court ruled it was unconstitutional for a juvenile to be sentenced to life without parole.

Otis, who was just 11 when he started using cocaine with his own father, has also clung to the hope that he will one day be free durig his two decades behind bars.

He said: “As a kid coming in this thing, I mean a lot of things people would hear I didn’t want to listen to so I went through a lot of bumping my head against the wall, getting into it with people arguing with people all the time.

It’s sad to say because I didn’t know no better. Out of these 20 years that I have done now I try to apply and grow from it, you feel what I’m saying?

Otis’s solicitor manages to strike a deal with the District Attorney, reducing his sentence from life without parole to life sentences with parole.

But for Felicia and Valene, the nightmare of what happened on that night 21 years ago goes on.

Both believe the man who killed their mother and left Valene with terrible injuries and forced to take medication for the rest of her life should never be freed.

Valene said: “They’re willing to help this murderer and it just kills me, as much pain and suffering that I’ve gone through.

“They’re just willing to throw me out the door and say hey we’re gonna help him and not you because he’s in jail and he’s doing this or whatever.

“Even though he was a child when he did what he did, he don’t deserve remorse because he didn’t give my mom none. He didn’t give me none.”