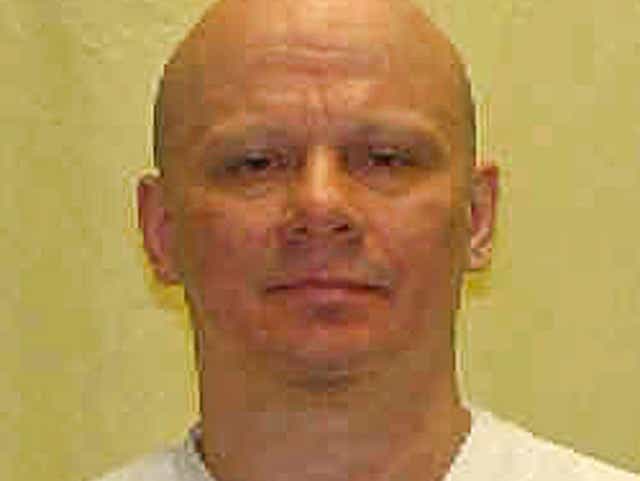 For the first time in seven years, Ohio executed a Cincinnati killer.

Convicted murderer Robert Van Hook was pronounced dead at 10:44 a.m. Wednesday. His death came more than 30 years after he brutally stabbed a man to death in his Hyde Park apartment.

David Self, 25, was found nearly disemboweled by his neighbor in Feb. 1985. The gaping wound in his torso revealed his internal organs and was stuffed with a cigarette butt and the murder weapon itself, a paring knife.

The night of the slaying Van Hook, also 25, met Self at Subway bar, a Downtown establishment popular among gay men. Both men’s sexualities would come up in the case. Back at Self’s apartment, Self approached Van Hook in a sexual manner, according to court records.

During a recent appeal, Van Hook’s case garnered national attention when his defense team said “homosexual panic” may have prompted the killing.

Investigators said Van Hook, formerly of Sharonville, strangled Self to the point of unconsciousness then began stabbing him. In addition to cutting open his abdomen, Van Hook attempted to cut Self’s head off, according to the records.

After the attack, Van Hook took several items from the apartment and smeared his own bloody fingerprints to hide his identity from police, prosecutors said.

About a month and a half later, Van Hook was arrested in Fort Lauderdale, Florida.

In an interview with police shortly after his arrest, Van Hook admitted to the killing and said: “My objective was to lure a homosexual to whatever place I could with intentions to rob the person.” Court records show Van Hook had been robbing gay men since he was 15.

“This case never would have been a death penalty case if Van Hook had kept his mouth shut,” said lawyer Stew Mathews, who represented Van Hook. He told The Enquirer when Van Hook admitted to taking items from the apartment, it increased the potential penalty.

“Had he not told them that, they never would have known it,” Mathews said.

Van Hook pleaded not guilty by reason of insanity and elected to have his case heard by the panel of three judges instead of a jury.

“It was gruesome, gruesome murder,” Mathews said. “The brutality of it all was why we tried it to a three-judge panel instead of a jury.”

During the trial, Van Hook and his lawyers argued that he went “berserk” and thought Self was a Viet Cong soldier.

County court psychologist Nancy Schmidtgoessling said Van Hook suffered from a personality disorder and had both heterosexual and homosexual identities. However, she and another psychiatrist agreed Van Hook knew what he was doing was wrong, and was therefore not insane during the attack.

The judges did not accept that Van Hook was insane and convicted him on July 30, 1985.

After the conviction, Van Hook’s defense team also argued that Self knowingly put himself in lethal danger.

“There’s no question but that David Self facilitated his own death,” Mathews said. According to reports at the time, Mathews said by being at a bar that caters to homosexuals and taking Van Hook home, Self accepted the risk.

The judges acknowledged that Van Hook had a bad childhood filled with abuse and neglect, but said that did not excuse what he did. In their opinion, they called Van Hook “a parasite on society preying on homosexuals for a livelihood.”

His case has been appealed multiple times. Van Hook was scheduled to be killed in 1994, but federal appeals delayed the execution.

In 2008, a Cincinnati federal appeals court set aside the death penalty for Van Hook due to inadequate representation in court, but that decision was overturned the following year in a rare move by the U.S. Supreme Court.

One of the appeals cited a report that was withheld from Van Hook during the trial. The psychologist, Schmidtgoessling, said in the report that “homosexual panic” was a possible motive for the killing. The term describes the panic Van Hook might have felt upon the realization he has sexual cravings that he may view as perverse.

In May, the Ohio Parole Board voted against clemency for Van Hook, now 58

At this point, several of the attorneys and judges who work on the initial trial have died.

“He’s outlived many of the principal players in this trial,” Mathews said Thursday. “It makes an excellent case against the death penalty. He’s already been in jail for 33 years. They ought to let him live out his days in prison.”

On Thursday, Mathews said he was still hoping the execution would be stopped or delayed.

In 2011, the Danish company that distributes pentobarbital said it would no longer provide it to agencies for the purpose of lethal injections. Ohio ran out of its stockpile of the drug in 2013. Pentobarbital was used alone or in conjunction with other drugs for executions.

Jan. 16, 2014, Dennis McGuire was executed using a mix of two different drugs and it took 25 minutes for him to die. Executions were stopped in the state until July 2017 when Ronald Phillips was killed using a three-drug combination. Gary Wayne Otte was also executed later that year.

Van Hook will be the first person from Hamilton County executed in over seven years. According to the death penalty information center, the last person from the county to be killed by the state was Daniel Bedford. He killed his ex-girlfriend and her boyfriend in 1984. He was put to death in May 2011.

Earlier this year, another man from Hamilton County, Raymond Tibbetts, was given a reprieve until October. In 1997, Tibbetts beat his wife to death and fatally stabbed the only possible witness, his landlord, Fred Hicks.

A juror in the case wrote to Governor John Kasich and said he would not have supported the death penalty for Tibbetts had he known more about the mitigating factors surrounding the case.

Tibbetts and Van Hook are among 24 convicted killers from Hamilton County on death row today. Ten others from the county have been executed since the death penalty’s return in 1999.