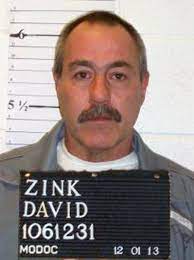 David Zink was executed by the State of Missouri for the kidnapping, sexual assault and murder of a nineteen year old woman. According to court documents David ZinK would kidnap Amanda Morton by hitting her vehicle with his car. When the woman got out of the vehicle David Zink would grab her and bring her to a motel where she was sexually assaulted. Amanda Norton was later brought to a cemetery where she would be tied to a tree and murdered. David Zink would be arrested, convicted and sentenced to death. Zink would be executed by lethal injection on July 14, 2015 by lethal injection

A Missouri inmate who killed a 19-year-old woman in 2001 after sexually attacking her and tying her to a cemetery tree was put to death Tuesday evening, after the U.S. Supreme Court and the state’s governor declined to block his execution.

Zink was executed by lethal injection at 7:33 p.m., he was declared dead at 7:41 p.m., according to the Missouri Department of Corrections.

“The horror and fear 19-year-old Amanda Morton must have felt after being kidnapped by David Zink that July night is truly unimaginable,” Attorney General Chris Koster made the following statement following the execution. “David Zink callously took a young woman’s life, and it is fitting he pay by losing his own.”

In a final statement, Zink said:

“I can’t imagine the pain and anguish one experiences when they learn that someone has killed a loved one, and I offer my sincerest apology to Amanda Morton’s family and friends for my actions. I hope my execution brings them the peace and satisfaction they seek.I also have to apologize to the second set of victims, my family and friends, that had the unfortunate circumstance of developing emotions which will now cause them pain and suffering upon my execution. I kept my promise to fight this case for their benefit, and although unsuccessful to prevent the execution, we have been successful in exposing some serious flaws that offend the basic concept of the American Justice System.For those who remain on death row, understand that everyone is going to die. Statistically speaking, we have a much easier death than most, so I encourage you to embrace it and celebrate our true liberation before society figures it out and condemns us to life without parole and we too will die a lingering death.”

Jurors in western Missouri’s St. Clair County deliberated 90 minutes in 2004 before convicting Zink and recommending a death sentence for the killing of Amanda Morton. Authorities said Zink abducted her after hitting her car from behind on an Interstate 44 exit ramp a mile from her Strafford home. Morton was driving home after visiting a friend.

Police found Morton’s Chevrolet Cavalier abandoned on the ramp with the keys in the ignition, the engine running and the headlights and hazard lights on. Her purse, credit card and medication were found inside the vehicle.

Just months before the slaying, David Zink had been released from a Texas prison after serving 20 years on rape, abduction and escape charges. Fearing that his drunken fender-bender with Morton could violate his parole and send him back to prison, Zink initially abducted Morton, taking her to a motel. That site’s manager later saw a televised news report about Morton’s disappearance, recognized her as the woman who had checked in with Zink, and gave investigators Zink’s name and license plate number from motel registration.

David Zink, after being arrested at his parents’ home, led authorities to Morton’s buried body in a cemetery, confessing matter-of-factly and at times laughing on videotape that he had tied her to a tree there and told her to look up. When the bewildered Morton begrudgingly glanced skyward, Zink said, he snapped her neck.

Worried that Morton might regain consciousness, David Zink admitted, he used a knife to sever her spinal cord at the neck and covered her body with leaves before retrieving from his home a shovel he used to bury her.

“If I think that you’re going to pose a threat to my freedom, it is set in my mind I want to eliminate you,” Zink says in his videotaped confession.

An autopsy later showed that Morton had eight broken ribs and 50 to 100 blunt-force injuries. Morton also had been sexually assaulted, with DNA evidence linked to Zink found on her body.

Missouri has executed five men this year and 16 since November 2013. Only Texas has executed more inmates over that span