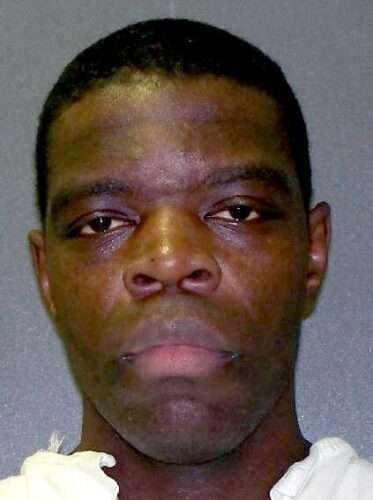 Derrick Charles is seen in this undated handout photo provided by the Texas Department of Criminal Justice. Charles faces lethal injection Tuesday evening, May 12, 2015, for the 2002 slayings of his 15-year-old girlfriend, her mother and her grandfather at their home. His lawyers argue the 32-year-old Charles is mentally incompetent for execution and they need time and court-approved money to pursue those claims. State attorneys are opposing any delay in the punishment. Charles was 19 at the time of the crime. (AP Photo/Texas Department of Criminal Justice)

A Texas man who killed his 15-year-old ex-girlfriend, her mother and her grandfather was executed Tuesday evening, after the U.S. Supreme Court declined to rule that he was mentally incompetent.

Derrick Charles was the seventh person put to death in Texas this year, at a time when lethal injections are on hold in several states around the nation.

His last statement was, “I’m ready to go home,” and Charles was pronounced dead at 6:36 p.m. CT, according to officials with the Texas Department of Criminal Justice.

Charles, 32, confessed and pleaded guilty to the 2002 triple slaying, telling police how he struggled to strangle teenager Myeshia Bennett and told her, “I guess you don’t want to die” — then bashed her in the face with a stereo speaker and dropped a TV on her head. He also admitted sexually abusing Bennett’s mother as she was dying.

In petitions filed with the U.S. Supreme Court, Charles’ lawyers argued that he suffered from mental illness that dates to childhood and should have been exempt from execution. They said that Texas courts did not provide him with an attorney or other services that would have helped him raise an incompetency claim.

In response, Texas said there was no evidence that Charles suffered from severe mental illness or that he did not understand why he was being executed.