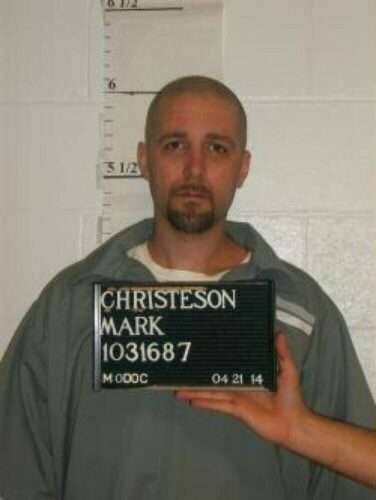 According to a statement from the Department of Corrections, Mark Christeson’s lethal injection began at 6:57 p.m., and he was pronounced dead at 7:05 p.m.

Christeson’s final meal was a bacon cheeseburger, fries, a slice of pecan pie, and a soda. When asked if he had a final statement, he said, “to let my family know I love them with all my heart and I’m more than blessed to have them in my life…and thank God for such an amazing family.”

“It will be 19 years ago tomorrow that Susan Brouk and her two young children were brutally murdered,” attorney general Josh Hawley said in a written statement. “My heart and prayers are with the victims’ loved ones. I hope that their families find solace in the judgment carried out tonight.”

“Tonight, as we remember Susan, Adrian, and Kyle Brouk, our thoughts and prayers are again with their family members and loved ones. The acts of violence that took this 36-year-old mother, her 12-year-old daughter, and her nine-year-old boy were unspeakably cruel. “Susan was a single mother whose life revolved around her children. Adrian was a seventh grader who did well in school and played volleyball. She hoped to one day be a veterinarian or a teacher. Kyle was only nine. He played soccer and dreamed of being an Army officer. They were a loving family, living a quiet life in a rural community. Their hopes and dreams were taken away by these evil crimes. “The man who was found guilty by a jury of raping and murdering Susan and murdering her two beloved children, Kyle and Adrian, has now had his sentence carried out. We know that a Missouri family will always miss and grieve the young mother and her two children who have been gone for nearly 20 years. Tonight, we grieve with them. “The process of justice on this matter has now reached its conclusion. We pray for comfort and healing for the families and friends whose lives have been deeply affected by these unspeakable crimes, so that they may find closure and peace. I ask that Missourians join me in keeping the family of Susan, Adrian, and Kyle Brouk in their thoughts and prayers tonight.

Harley Brouk, the half-sister of Adrian and Kyle, also prepared a statement:

“Almost 19 years ago to the day my brother and sister were taken from us, this is the day that we finally get justice for them. I know that they are watching over us and they’re happy for all of us. There’s not a day that goes by that I do not miss them and I wish that they were here. “Now we have justice and we can all move forward through this tragedy the rest of the way. I was only five when they were taken from me but it has impacted my life entirely. I never got to have that special bond with my brother or sister that every kid wishes for. “Kyle was nine and Adrian was 12. They never got to fully live out their lives and go through college and high school and figure out what it is they wanted to do in this world. “But now that they are above us, watching over us, I know I have the world’s greatest guardian angels anybody could ask for. “This is a sad day, a happy day and a day that I will never forget.”

‘Justice was absolutely not served’

Christeson was put to death despite the substance of his state case never being heard by a federal court, according to attorney Joseph Perkovich. He said they never had the financial capacity to fully evaluate his mental capacity, for starters.

“We, as his attorneys, who came into the case less than three years, have never had resources to have medical professionals examine him, so we don’t know the full extent of his limitations,” he said. “We can observe them as lay people, and we have – we’ve talked to people who’ve known him over the years in prison and outside of it – but because the courts deprived the resources to actually get at these fundamental questions about his capacity, that was never done.”

On October 12 of last year, while Perkovich and fellow attorney Jennifer Merrigan were challenging that move, the Missouri Supreme Court set Christeson’s execution date for January 31. He said from that point there seemed to be a rush to have him put to death.

“Here we had three different issues, four issues in total, granted to be heard for briefing and argument, and almost instantly that process was compressed to the point of distorting it,” Perkovich said. “(It) led to the court holding onto the case…so that they could then rule against Mr. Christeson and stay on schedule, so that the powers that be who thought it was important to have this execution go forward could stay on schedule.”

In Missouri’s response to the appeal for a stay of execution, attorney general Josh Hawley argued that Christeson was not hampered by any “putative mental incapacity.”

“Christeson was able to carry out normal everyday functions,” Hawley said. “He was able to respond to prison conduct violation allegations, identify a witness, request an attorney for a grievance, and provide his own version of events.”

He issued a written statement, which reads in part:

“As Governor, clemency is a power and a process I take seriously. I have thoughtfully considered the facts of this case. I have done a comprehensive review of the request from Mr. Christeson. After deliberate consideration, I deny clemency. My decision today upholds the decision handed down by the jury and upheld by both state and federal courts.

“As preparations are made to carry out the sentence, I ask that Missourians remember Susan Brouk, Adrian Brouk, and Kyle Brouk at this time and keep their family members and loved ones in your thoughts and prayers. May god bless them and their families.”

The U.S. Supreme Court has denied Christeson’s appeal for a stay, and a separate appeal for his case to be sent back to a lower court. A spokesperson for the High Court said that Justice Ruth Bader Ginsburg would have granted the stay.

He’s scheduled to die by lethal injection during the 24-hour window that begins at 6:00 p.m. Tuesday.

In filings to the nation’s high court Monday afternoon, Christeson’s attorney, Jennifer Merrigan, argues that a stay of execution is warranted due to evidence of “attorney misconduct,” stating that the attorneys from his first trial missed a deadline for a federal appeal in 2005.

In addition to the stay, Merrigan argues that a new federal judge should be assigned to re-hear the case. She also says Christeson was incapable of understanding his legal rights during his original trial because he is “severely mentally impaired.”

One decision initially went in his favor in December, in which he was granted an additional hearing into his mental capacity. But the state of Missouri requested, and was granted, an expedited schedule for the hearing and filings ahead of time, in order to meet the January 31 execution date.

That hearing took place on January 20th, and a federal judge ruled against Christeson.