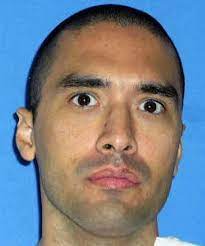 A paid hit man was executed Tuesday night in Texas for gunning down a San Antonio woman in a life insurance scheme nearly a quarter-century ago.

Rolando Ruiz was given a lethal injection for fatally shooting Theresa Rodriguez, 29, outside her home in 1992 as she was getting out of a car with her husband and brother-in-law, who both orchestrated her murder. Ruiz was paid $2,000 to carry out the killing.

Ruiz, strapped to the Texas death chamber gurney, looked directly at two sisters of his victim and their husbands and apologized profusely.

“Words cannot begin to express how sorry I am and the hurt I have caused you and your family,” he told them as they looked through a window a few feet from him. “May this bring you peace and forgiveness.”

He also thanked his own family for their love and support.

As the lethal dose of pentobarbital was administered, he took several deep breaths, then began snoring quietly.  All movement stopped within about 30 seconds.

His execution was the third this year in Texas and the fifth nationally.

“It’s not going to bring her back, so it really doesn’t mean very much,” Susie Sanchez, whose daughter was killed in the contract murder, said Monday. Her daughters, who were among the witnesses Tuesday night, declined to comment afterward.

The execution was delayed for nearly five hours until the U.S. Supreme Court rejected three appeals attorneys had filed for Ruiz to try to stop the punishment

His lawyers argued to the high court that lower courts improperly rejected an earlier appeal that focused on whether Ruiz earlier had deficient legal help. They also contended Ruiz’s execution would be unconstitutionally cruel because he’s been on death row since 1995, had multiple execution dates and two reprieves. Attorney Lee Kovarsky blamed the long time between a San Antonio jury’s verdict and the punishment on the state’s failure to provide Ruiz with competent lawyers earlier in his appeals.

Justice Stephen Breyer said he would have stopped the execution to further examine the question of prolonged death row confinement.

Assistant Texas Attorney General Edward Marshall had disputed the claims, telling the high court arguments about earlier deficient legal help “have been inspected, scrutinized, studied, probed, analyzed, reviewed and evaluated” at all levels of the federal courts. While some individual Supreme Court justices, like Breyer, have raised questions about long death row confinement, the courts consistently have ruled it was not unconstitutionally cruel.

Ruiz approached a car pulling up to Rodriguez’s home the night of July 14, 1992, under the guise of seeking directions. Her husband of nearly seven years, Michael, was in the car along with Michael’s brother, Mark. Ruiz, who already had pocketed $1,000 and had failed in two earlier killing attempts, asked Mark Rodriguez if he wanted him to “do it,” and Rodriguez gave him the go-ahead. As Theresa Rodriguez was getting out of the car, Ruiz put a .357 Magnum revolver to her head and fired. Three days later, Ruiz collected another $1,000 for the completed job.

Evidence showed Michael Rodriguez stood to collect at least a quarter-million dollars in insurance benefits from his wife’s death and that he’d recently applied for another $150,000 in life insurance for her.

Ruiz had met Mark Rodriguez at the home of a mutual friend, was arrested nine days after the shooting and implicated the brothers. The police investigation was aided by a telephone tip after Theresa Rodriguez’s employer, the San Antonio-based financial services giant USAA, offered a $50,000 reward for information about her slaying.

Michael Rodriguez later joined Ruiz on death row as one of the notorious Texas 7, a group of seven inmates who escaped from a South Texas prison in 2000 and killed a Dallas-area police officer. He was executed in 2008. He blamed his infatuation with a younger woman for the contract murder plot.

Joe Ramon, who accompanied Ruiz the night of the shooting, and Robert Silva, identified as the intermediary who put the Rodriguez brothers in touch with Ruiz, also received life prison sentences.