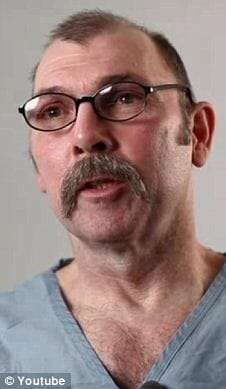 An Oklahoma man convicted of murdering a Tulsa convenience store manager almost 37 years ago was executed by lethal injection Tuesday.
Michael Bascum Selsor, 57, was pronounced dead at 6:06 p.m. Tuesday at the Oklahoma State Penitentiary.
Selsor’s execution ends more than 3 decades of legal proceedings in which Selsor was twice convicted of 1st-degree murder and sentenced to die for the Sept. 15, 1975, shooting death of Clayton Chandler.
“My son, my sister, I love you till I see you again next time,” Selsor said. “I’ll be waiting at the gates of heaven for you. I hope the rest of you make it there as well.”

He didn’t address Chandler’s relatives, some of whom were watching him.

He breathed heavily a couple of times, and then stopped. The clanging did, too. He was pronounced dead at 6:06 p.m.

The 55-year-old Chandler was shot 8 times during an armed robbery in which the thieves got away with a little more than $500. Michael Bascum Selsor, and Richard Dodson, were arrested a week after Chandler’s death in Santa Barbara, Calif., where their car with Oklahoma tags had been spotted.
Selsor was originally convicted and sentenced to death following a 1976 trial, in which Dodson was a co-defendant. Later that year, the U.S. Supreme Court invalidated Oklahoma’s mandatory death penalty statute. The Oklahoma Court of Criminal Appeals modified Selsor’s sentence to life in prison without parole.
Michael Bascum Selsor, initiated a new round of appeals challenging his conviction and in April 1996, the 10th U.S. Circuit Court of Appeals threw out Selsor’s murder conviction, as well as two related convictions.
In 1998, Selsor was convicted of first-degree murder and sentenced to death following a retrial. The same jury recommended Selsor serve a life term as an accessory to Dodson’s shooting of Chandler’s co-worker, Ina Louise Morris, who survived multiple gunshot wounds. The jury also imposed a 20-year term for armed robbery.
On April 16, the Oklahoma Pardon and Parole Board voted 4-1 against commuting Selsor’s death penalty to life in prison without parole.
The U.S. Supreme Court rejected his request for a stay of execution Friday. Defense attorneys had argued that executing Michael Bascum Selsor after he has been in prison for almost 2 generations lacked any deterrent value and would “amount to cruel and unusual punishment” in violation of his constitutional rights under the Eighth Amendment.
Dodson, now 71, was convicted of robbery and shooting with intent to kill and is serving a prison sentence of 50 to 199 years. Dodson is imprisoned in the Davis Correctional Facility in Holdenville and has a parole hearing scheduled for November 2013, according to Department of Corrections records.
Selsor becomes the 3rd condemned inmate to be put to death this year in Oklahoma and the 99th overall since the state resumed capital punishment in 1990. Only Texas (482) and Virginia (109) have executed more inmates since the death penalty was re-legalized in the USA on July 2, 1976.
Selsor becomes the 18th condemned inmate to be put to death this year in the USA and the 1295th overall since the nation resumed executions on January 17, 1977.