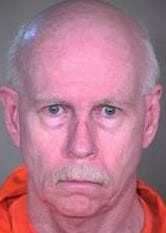 Arizona’s most notorious death row inmates past and present have incredible stories.

“I don’t show any mercy, and I am certainly not here to plead for mercy.” These are the words of Thomas Kemp at his clemency hearing. Kemp was a man with no regrets for taking life and no regrets for having his life taken

On July 11, 1992, college student Hector Juarez was awakened around 11:15 p.m. when his fiancée returned from work to their apartment in Tucson. Juarez was hungry and went to a fast food restaurant down the street. After Juarez had not returned for a while, his fiancée went looking for him, finding his car in the parking lot of a Jack in the Box. The car smelled of fast food and was unlocked, but Juarez was nowhere around.

Three days earlier, Kemp had met up with former prison inmate Jeffrey Logan, who recently escaped from a California “honor farm.”  On July 11, the two went to a pawn shop where Logan bought a hand gun. Later that night, they saw an opportunity to get some quick cash when they saw Juarez in the restaurant parking lot and abducted him.

The pair forced Juarez to withdraw $200 from an ATM, and then drove him to the Silverbell Mine near Marana, where they stripped him of his clothes before shooting him twice in the head.  They tried using Juarez’s ATM card again, but when it was refused they drove to Flagstaff, sold their vehicle, and used the money to buy another gun.

While in Flagstaff, they met a couple traveling from California to Kansas and kidnapped them, driving them to Durango, Colo. While in a motel there, Kemp forced the male victim to disrobe and sexually assaulted him. They forced the couple to continue driving with them to Denver, where the couple escaped and Logan left Kemp. Logan turned himself in to Denver police and told them of Juarez’s murder.

Logan assisted Tucson police in finding the body, and later that same day Kemp was found and arrested at a homeless shelter in Tucson.

After being told that Logan was already in custody and was cooperating with police, Kemp told officers, “I guess my life is over now.”

Logan was tried first, convicted and sentenced to life in prison.

While waiting for his trial, Kemp told corrections officials that he was in protective custody because the person he killed was Hispanic, the Hispanics in the jail were after him because they thought the crime was racially motivated, and the whites would not protect him

Kemp was convicted on June 7, 1993 and at his sentencing, he told the judge that he should have killed Logan when he had the chance, but as far as killing Juarez he had no regrets. “The so-called victim was not an American citizen and, therefore, was beneath my contempt,” he then referred to Juarez using a racial slur. “If more of them ended up dead, the rest of them would soon learn to stay in Mexico where they belong.”

Kemp was executed four years ago April 25, 2012. No one from his family or the victim’s family attended.