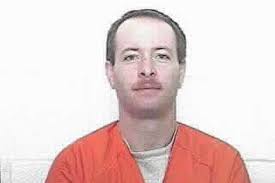 The federal government on Tuesday executed a former soldier who claimed his belief in witchcraft led him to rape and murder a Georgia nurse he thought had cursed him.

William Emmett LeCroy, 50, was pronounced dead at 9:06 p.m. via lethal injection at the Federal Correctional Complex in Terre Haute, Indiana — the same facility where five other inmates have been executed this year.

LeCroy was found guilty of murdering Joann Lee Tiesler on Oct. 7, 2001. He had broken into her Cherrylog, Georgia, home and waited for her to return from grocery shopping. As Tiesler opened her door, LeCroy bashed her with a shotgun and tied her up.

He then raped and stabbed her repeatedly.

Tiesler had lived nearby one of LeCroy’s relatives and he would wave to her as he drove by her home. Eventually, LeCroy grew to believe she was his old babysitter, who he called Tinkerbell, who he said sexually abused him as a child.

LeCroy believed by killing her he would reverse a curse Tinkerbell put on him —  but he realized shortly after the grisly murder that he had the wrong woman.

Authorities arrested LeCroy at a checkpoint two days after his killing and found him to be in possession of a note asking for forgiveness.

“You were an angel and I killed you,” read the note. “I am a vagabond and doomed to hell.”

LeCroy on Tuesday night remained calm with a sheet pulled up to this neck during his execution. He kept his eye opened and drawn to the ceiling as his spiritual adviser, Sister Barbara Battista read from a prayer book.

His lawyers had petitioned President Donald Trump to commute LeCroy’s sentence to life in prison, arguing that his family would be devastated by the loss after LeCroy’s brother, Georgia State Trooper Chad LeCroy, was killed during a traffic stop in 2010.

LeCroy joined the Army as a 17-year-old but was discharged for going AWOL.

“Today justice was finally served. William LeCroy died a peaceful death in stark contrast to the horror he imposed on my daughter Joann,” he said in a statement.

“I am unaware that he ever showed any remorse for his evil actions, his life of crime or for the horrific burden he caused Joann’s loved ones.”