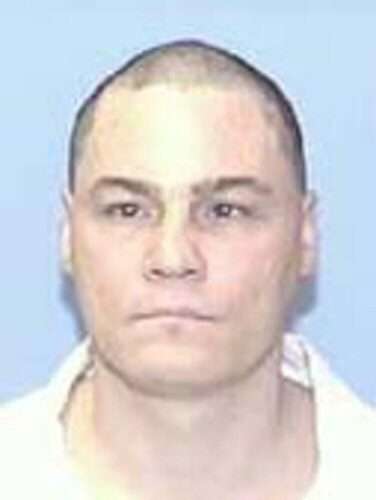 In Texas’ first execution of 2016, a man convicted in a fatal strangling and robbery was executed in Huntsville Wednesday night.

Richard Masterson, 43, was declared dead at 6:53 p.m. from a lethal injection of pentobarbital, according to the Texas Department of Criminal Justice. He was sentenced to death for the 2001 strangulation of Darin Honeycutt in Harris County, and served almost 14 years on death row.

The Texas Court of Criminal Appeals and the U.S. Supreme Court both denied last-minute requests for stays of execution Wednesday.

“Sending me to a better place. I am alright with this,” Masterson said in his final words. “You have to live and die by the choices that we make. I have made mine.”

Masterson met Honeycutt at a bar, and the two left together early on Jan. 26, 2001. Honeycutt’s body was found in his apartment the next day, and his car was gone, according to court documents.

Masterson was arrested Feb. 6 in Florida. He originally confessed to intentionally killing Honeycutt but later claimed that the death was accidental, saying Honeycutt had asked to be choked while they were having sex.

The medical examiner in the case testified during the trial that the death was caused by intentional strangulation, and the jury found Masterson guilty and sentenced him to death in May 2002.

The day before Masterson’s execution date, his lawyers filed last-minute requests for stays and new hearings in the U.S. Supreme Court and the Texas Court of Criminal Appeals, after already having received several denials.

In their latest appeal at the state level, Masterson’s lawyers asked for a new hearing to challenge the constitutionality of a statute that allows the state to keep execution drug manufacturers secret. The Court of Criminal Appeals denied the request Wednesday morning.

In an appeal to the U.S. Supreme Court, attorney Gregory Gardner said that Honeycutt died of a heart attack after having sex with Masterson. Gardner said that Paul Shrode, the medical examiner, wrongly classified the death as a homicide.

In the same year as Honeycutt’s death, Shrode was written up by the Harris County Medical Examiner’s Office for wrongly determining a cause of death. In 2010, he was fired from his position as El Paso County chief medical examiner after a death row inmate in Ohio was granted clemency due to issues related to Shrode’s testimony in the case.

These incidents and the fact that the state did not reveal them to Masterson, Gardner argued, was cause for a stay and hearing. The request was denied by the U.S. Supreme Court Wednesday afternoon, allowing the execution to move forward.

“Richard was an innocent man,” Gardner said. “If [he] was not poor, he could have afforded attorneys who would have handled his case properly. He would be free today.”

The execution was the first of nine scheduled for the first six months of the year, according to the Texas Department of Criminal Justice, with the second scheduled for James Freeman next Wednesday. Thirteen men were put to death by the state of Texas in 2015.