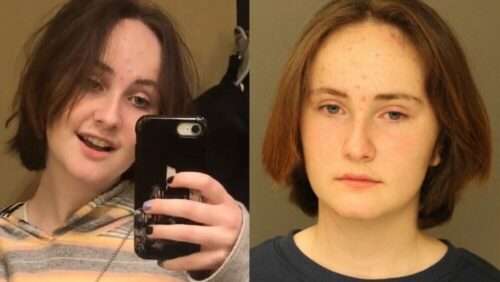 The popular TicToker who had millions of views under the name ‘spiritsandsuchconsulting’ account when through the roof when news was released regarding the murder.

A 14-year-old girl accused of stabbing her older disabled sister to death in the middle of the night was on the phone with someone who told police Claire Miller was having “suicidal and homicidal thoughts.”

The new detail was included in court records filed to support a search warrant of the Manheim Township home where Claire lived with her sister, Helen, and their parents, in the 1500 block of Clayton Road.

The records didn’t explain whether the witness talked to Claire Miller before, during or after the stabbing of Helen Miller, who had cerebral palsy and used a wheelchair.

Police were called to the family’s ranch home at 1:08 a.m. Monday, and they arrived five minutes later. They were greeted outside by Claire Miller, wearing bloody pants and with blood on her hands, repeatedly saying “I stabbed my sister,” according to court records.

Officers went inside and found Helen Miller, 19, on her back in a bedroom with a bloody pillow over her face. When an officer removed the pillow, a large knife was sticking out of her neck and blood was pooled on her chest and bed. She died from multiple stab wounds, the coroner said.

Police said they heard from a witness at 1:42 a.m. that the witness previously had been communicating with Claire Miller on the phone and that the teen was having “suicidal and homicidal thoughts.”

No further details on the witness’ identity or conversation with Claire Miller were included in the court documents. The documents outlined what items police collected from the crime scene, including the clothes Claire Miller was wearing at the time of the killing: A blue t- shirt with a white cat face on it and black, white and gray checkered pajama pants.

Police also collected bloody sheets, blankets and a comforter from Helen’s front bedroom, and a stuffed rabbit toy that was on a blanket.

Officers took swabs for DNA testing from the front door inside doorknob, the closet door in Helen’s room, Helen’s box springs, her carpet, an alarm keypad and a spot of suspected blood on the floor in front of an elevator. The ranch home has a finished basement.

Police also collected several sharp objects from the home to see if any were used in the stabbing in addition to the knife left in Helen’s neck. They took nine kitchen knives found in drawers or the dishwasher and they found these items in a rear bedroom: an Exacto knife in a desk; a dart board on the desk, and a paper towel with suspected blood on the floor.

Police also took a white board with chores for Claire located in the dining room. Officers said in their application for a search warrant that they would be looking for Claire’s cell phone, which could assist the investigation potentially establishing a motive and the events that occurred before, during and after the crime, but no phone was listed as among the items seized by police.

Claire Miller, who was charged with criminal homicide, is being held without bail in the Lancaster County Prison as she awaits court proceedings. She had a preliminary hearing set for Friday but it was continued. She is being held in prison in a cell by herself in the female unit of the facility under constant observation, officials sad.

Shortly after police say Claire Miller stabbed her sister to death early Monday morning, a person told police the 14-year-old girl had been having suicidal and homicidal thoughts, according to a search warrant application.

Miller called police shortly after 1 a.m. Monday and told them, hysterically, that she had killed her sister, according to Manheim Township police. When officers arrived to the Clayton Avenue home, they found Helen Miller, 19, in a bedroom with a pillow over her face and a knife sticking out of her neck. Helen Miller, who had cerebral palsy, had been stabbed repeatedly, an autopsy found.

Claire Miller’s attorney, Robert Beyer, who has previously declined comment, could not immediately be reached Thursday.

Claire Miller is being held in Lancaster County Prison without bail.

A 14-year-old girl in Manheim Township has been charged in the killing of her older sister, according to the Lancaster County District Attorney’s Office.

Claire Miller was arraigned Monday on a homicide charge and is being held without bail at Lancaster County Prison. She is charged as an adult in the killing of her sister, Helen Miller, 19.

Authorities said police responded shortly after 1 a.m. Monday to the family home in the 1500 block of Clayton Road.

According to court documents, Miller was outside the home when officers arrived and repeatedly said, “I stabbed my sister.”

Police said they went inside the home and found 19-year-old Helen Miller, who is wheelchair-bound, in a bedroom with a large knife in her neck. Life-saving measures were attempted but were unsuccessful, police said.

Investigators want to know what led up to the stabbing.

“Looking for evidence and trying to come up with a timetable and whatever they can find to help them understand what might have happened,” Manheim Township police chief Tom Rudzinski said.

Police believe the girls’ parents were home but asleep when the stabbing occurred.

“My heart goes out to them, and I can’t even begin to understand or imagine the pain that they feel at this point,” Rudzinski said.

The Lancaster County coroner on Wednesday released the autopsy results for Helen Miller.

The coroner said she died of multiple stab wounds.

Her death has been ruled a homicide.

“A Manheim Township teenager is charged with killing her older sister in her family home in the early morning hours on February 22, 2021.

“Officers with the Manheim Township Police Department were dispatched shortly after 1:00 am Monday, February 22, 2021, to the 1500 Block of Clayton Road, Manheim Township, after a female called 911 and reported that she had killed her sister. Arriving officers were met by Claire E. Miller F/14 who directed them to a bedroom where they found Helen M. Miller F/19 with a stab wound in her neck. Officers and EMS personnel attempted lifesaving measures, but they were unsuccessful. Information obtained so far determined that the incident happened during the overnight hours when the girls’ parents were asleep.

“Claire Miller was taken into custody at the scene. The Lancaster County District Attorney’s Office is assisting with the investigation and approved charging Claire Miller with Criminal Homicide. Miller will be arraigned by Magisterial District Judge David Miller. It is expected that Miller will be transported to Lancaster County Prison after arraignment on the charge of Homicide. Anyone charged with homicide in Pennsylvania is not eligible for bail. Claire Miller is being charged as an adult because homicide is not considered a delinquent act in Pennsylvania.

“Police indicate there is no threat to public safety. Manheim Township Police are fully committed to this investigation. Investigators and members of the Lancaster County Major Crimes Unit are still at the residence collecting evidence and working to determine the circumstances that led to Helen Miller’s death.