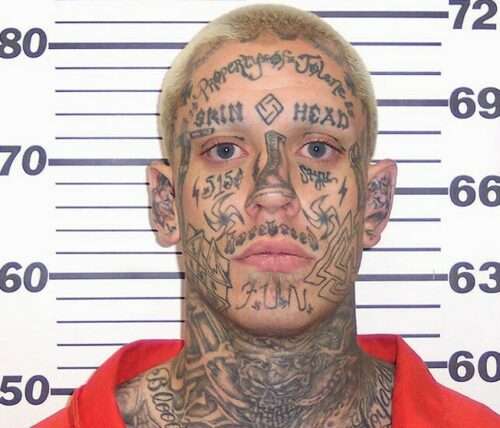 When people think of prison inmates whose face is covered by tattoos the first one to come to mind is Curtis Allgier. Curtis Allgier came to prominence when he appeared on the old prison show on MSNBC called Lockup where he attempted to justify his white nationalist background.

However Curtis Allgier would once again come to the forefront when he was escorted from the prison to a hospital to check out a medical problem when he would kill a correctional officer and go the run. Curtis Allgier managed to delay his sentencing for years by acting as his own lawyer and his outlandish actions within the courtroom.

However in the end Curtis Allgier would receive a life in prison sentence without possibility of parole. Curtis Allgier rejected his white nationalist background and was engaged to a Hispanic woman

Curtis Allgier is not within the Utah prison sentence. Chances are due to his high profile case and the fact he murdered a prison guard means he is being housed out of State

Utah inmate accused of killing a guard during a medical appointment said he had run out of hope and couldn’t see a future beyond prison, according to an Oregon tattoo artist who talked to him just a week earlier.

“He told me, ‘I don’t feel like I have anything left to live for,”‘ Kira Diamond told The Associated Press in a telephone interview from Portland.

Diamond said she and Curtis Allgier exchanged letters and had almost weekly telephone conversations. She first contacted him last year after seeing him on an MSNBC program talking about prison life and tattoos, which include a swastika and “skin head” on his forehead.

Utah Department of Corrections officer Stephen Anderson, 60, was shot in the head with his own gun Monday while trying to prevent Allgier from escaping during a visit to a University of Utah clinic, police said.

Allgier fled, stole a car and led police on a high-speed chase before being captured inside an Arby’s restaurant.

In a round of media interviews Wednesday, Allgier, 27, admitted that he was trying to escape but denied pulling the trigger. He said the gun just “went off” during a struggle with Anderson.

At a news conference Thursday, Anderson’s family said their Mormon beliefs left them with no ill will toward Allgier, but they found his remarks “alarming.”

“At the same time, we have full trust in the police that they will satisfy the case,” cousin Mark Anderson said.

Anderson’s funeral is planned for Friday in Bluffdale.

Allgier is in the Salt Lake County jail awaiting charges, which could come Thursday. A telephone message left with defense attorney Michael Peterson was not immediately returned.

Allgier was in state prison for a parole violation on convictions for burglary and escape. Earlier this month, he was sentenced to nearly nine years in federal prison for a gun crime. His wife has also filed for divorce, Diamond said.

“He’s really been overwrought. Just really sad. You can only take so much loss in your life,” she said.

Diamond said she and Allgier talked about routine matters in letters and phone calls.

“We talked about our lives, what he wanted to do with his life,” she said. “He talked about construction, building houses, about wanting to have a family – normal stuff that anybody would want. Nothing grandiose or unrealistic.”

A Utah inmate has pleaded guilty to killing a prison guard in 2007 to avoid the death penalty.

Curtis Allgier had been charged in 3rd District Court with capital murder for the June 25, 2007 killing of 60-year-old Stephen Anderson. Authorities said Allgier grabbed the guard’s gun and shot him during a medical visit outside of prison.

The 32-year-old Allgier and prosecutors agreed he will serve life without the possibility of parole. The death penalty was withdrawn on Wednesday.

He pleaded no contest to three counts of first-degree felony attempted aggravated murder.