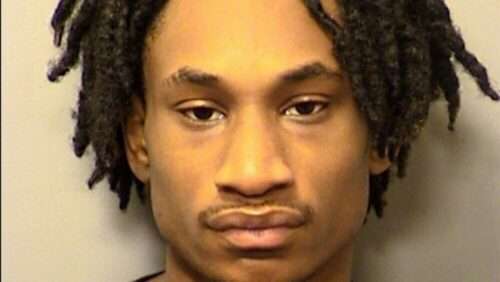 Raymond Childs III has been charged with six counts of murder related to a shooting in Indianapolis Indiana that left five people dead including a pregnant woman who was due to give birth any day.

After the shooting Raymond Childs III would go to his girlfriends home and return to the crime scene to grab some clothing. Raymond brother who survived the shooting would identify him as the shooter to police.

Raymond Childs III now faces six counts of murder and will spend the rest of his life in prison if convicted. Due to the age of the teen killer the death penalty is not on the table.

A 17-year-old Indianapolis boy accused of fatally shooting his father, stepmother, two teenage relatives and a heavily pregnant 19-year-old woman was charged with six counts of murder Thursday, according to a prosecutor and court documents.

Raymond Ronald Lee Childs III, who was arrested Monday in the shootings a day earlier, was charged as an adult, Marion County Prosecutor Ryan Mears announced. One of the six murder counts was in the death of the unborn baby, Mears said.

“Not only did so many people lose their lives but you think about that family and what they were anticipating — the baby was due in a week,” Mears said during a news conference.

Childs also faces an attempted murder charge in the wounding of another relative, a 15-year-old boy who was the sole survivor of the shooting on Indianapolis’ near northeast side, according to court records. He was also charged with carrying a handgun without a license.

In Indiana, a person at least 16 years of age will be charged as an adult if they are accused of committing certain felonies, including murder and attempted murder.

During his initial hearing on Thursday afternoon, a magistrate entered a not guilty plea for Childs, ordered him held without bond and appointed a public defender. The Associated Press left a message seeking comment from that attorney.

Childs had argued with his father about him sneaking out of the house, Mears said. Authorities were still trying to determine what happened between the late night argument and the shootings reported around 4 a.m. Sunday.

Raymond Childs Jr., his wife, Kezzie Childs, 42, and two other relatives — Elijah Childs, 18, and Rita Childs, 13 — were pronounced dead at the home, the Marion County Coroner’s office said. Kiara Hawkins, 19, who Mears said was in a relationship with someone at the home, was taken to a hospital, where she and her unborn son died, authorities said.

Mears said in a news release that Raymond Childs Jr. was the suspect’s father and Kezzie Childs was his stepmother. He didn’t explain the relationships between the other victims.

According to a probable cause affidavit, relatives and friends told police that Hawkins was Elijah Childs’ girlfriend and that she also lived at the home.

The 15-year-old boy who survived the shooting told police that Raymond Childs III is his brother and that his sibling shot him as he fled the house to escape the gunfire, the affidavit states. He suffered multiple gunshot wounds and underwent surgery.

He also told police that his mother, father, his brother, Elijah Childs, and his younger sister, identified only as “R.C.” in the affidavit, were in the house along with Hawkins when the shooting began.

The teen told officers that Childs “had gotten in trouble that night for leaving the house without permission.”

The suspect’s girlfriend told police he was spending the night with her on Jan. 23 when his father called and asked him to come home, according to the affidavit. Childs left but returned between 2 a.m. and 3 a.m. on Jan. 24 with bags of clothing and some shoes, telling her “his father had kicked him out.”

About half an hour later, she received two cellphone alerts about a shooting, with the second alert saying a shooting had occurred on the street where Childs’ family resides. She said Childs told her he knew nothing about that shooting, but later that morning when they went to his family’s home “he began crying” and acting like “a clown.”

Mears said two firearms were used in the shootings. A 9-millimeter handgun was recovered at the scene and a semi-automatic firearm was found when Childs was taken into custody at a relative’s home. According to the affidavit, detectives determined that both weapons had been fired inside the home where the killings occurred.

Indianapolis police Chief Randal Taylor has called the killings the largest mass casualty shooting in the city in more than a decade. He said in a statement Thursday that he was grateful to his officers, Mears and the prosecutor’s staff for their work on the case, and he urged the community to rally around the surviving teenager “as he must come to terms with unimaginable loss.”

The horror on Adams Street began with an argument that plays out in nearly every American family with a teenager: a battle over staying out too late. This one, though, didn’t end in a grounding or scolding. Police and prosecutors say it ended in the worst mass killing in Indianapolis in more than a decade.

A family — mom, dad, two siblings, a pregnant teen and her unborn child, less than a week from entering the world — were slaughtered. Another brother escaped and tried to buy his life with $40. He was shot and left for dead but became the sole survivor of the massacre.

According to that surviving 15-year-old, his father’s last words to the son who allegedly killed him were “I love you.”

The Marion County Prosecutor’s Office announced Thursday that Raymond Ronald Lee Childs III has been formally charged with six counts of murder, attempted murder and carrying a handgun without a license in Marion County. At just 17 years old, Childs cannot be put to death. But he could face up to life in prison, if he is found guilty of the murders.

The 17-year-old was arrested Monday at the home of a relative just one day after his family was found slain in the near-northside home they shared.

Officials said Hawkins was in a relationship with Elijah Childs. The other victims were all immediate family.

According to court documents released Thursday, IMPD officers were called to the 3300 block of East 36th Street shortly before 4 a.m. Sunday on a report of a person shot.

Police found a 15-year-old suffering from multiple gunshot wounds on the front porch of a home. The boy was taken to the hospital in critical condition.

Before being rushed into surgery, the boy told police that he had been shot by his own brother, the younger Raymond Childs.

When asked about his parents, the 15-year-old told police, “He shot them. I think they’re dead.”

Police found the front door of the teen’s home open. Inside the two-story brick house, they found five victims.

Every member of the Childs family found in the residence was pronounced dead at the scene. Hawkins was taken to Eskenazi Hospital, where she was later pronounced dead.

Her baby boy, just a week shy of his due date, was delivered via emergency cesarean section but was declared dead upon delivery.

An autopsy of the unborn child determined that he died due to his mother being shot. He was full term.

By Sunday afternoon, the 15-year-old boy had survived surgery at Riley Hospital for Children. According to court documents, he told police in separate interviews that Childs had gotten into trouble that night for leaving the house without permission.

The teen said he was downstairs with his parents when his father asked him for some water. As he filled the bottle in the bathroom, he heard two gunshots followed by his little sister yelling, “Raymond shot Elijah!”

Another six or seven shots went off.

The 15-year-old said he ran out of a side door when the shooting stopped, but his brother chased him down.

The teen pleaded with his big brother, court documents said. “I can give you forty dollars. I won’t say nothing. Please don’t kill me.”

The shooting victim told investigators that his brother looked at him before shooting him in the leg and arm with a Draco 7.62. He said Childs then fired at his head but missed.

The teen ran to a neighbor’s house and banged on the door for help.

Friends and family told police that 17-year-old Raymond Childs III was the only family member who lived at the home who was not accounted for. Neighbors also said a white Chrysler with fancy rims was not at the home.

They soon found that Chrysler at the home of Childs’ girlfriend. Police made contact with the girlfriend following a traffic stop.

She told police that Childs went to her house to spend the night Saturday, court documents said. He got a phone call from his father telling him to go home, and he did.

Childs returned to his girlfriend’s house between 2 and 3 a.m. Sunday driving a white Chrysler she had never seen before. Childs had two bags of clothes with him and told his girlfriend that his dad kicked him out.

A Draco 7.62 was recovered by police as they investigated the Adams Street killings.

About 30 minutes later, the girlfriend got alerts on her phone about the shootings at 36th Street and Adams Street. Childs said he didn’t know anything about the incidents.

The girlfriend later convinced Raymond Childs to go back home after talking to his other family members, court documents said. She told police that Childs was nervous, and when they got there, he began crying and “acted a clown.”

Family members who came to Indianapolis told police Childs said “some people from the next block” committed the killings.

Police also obtained a search warrant for the girlfriend’s car and found an AK-style magazine wrapped in clothes containing 30 rounds of 7.62 ammunition.

Police later determined that all of the shell casings found at the scene Sunday came from the 9mm found at the home and the Draco 7.62 given to police.

Police arrested Raymond Childs without incident at the home of a relative on Monday.

Marion County Prosecutor Ryan Mears said Thursday that the age of the suspect puts his office in a “unique procedural posture.”

Indiana law says that 17-year-olds who are charged with murder must be tried as adults. However, they are not eligible for the death penalty.

Mears said the next phase of the investigation includes assessing Childs’ mental state, as well as looking at what past incidents may have built to Sunday’s violence.

“I think it’s important to recognize that this case is really in its infancy. We’ve been working on this for 96 hours,” Mears said.

Mears said the case has taken its toll on the family, the community and the investigators. His office is now focused on doing all they can to assist the family though the pursuit of justice.